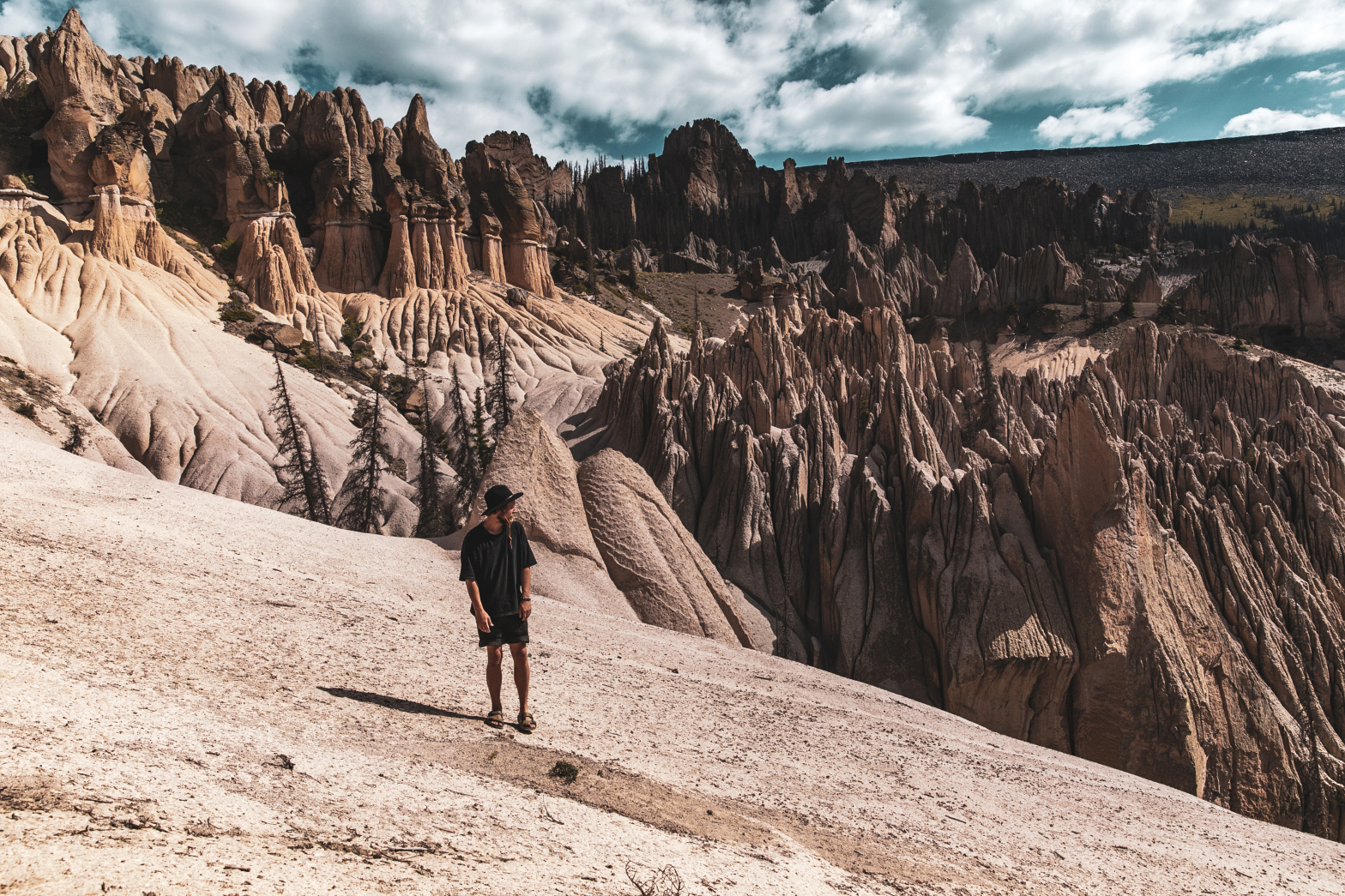 Have you ever traveled somewhere local and it transported you to a completely different world? That’s exactly how it felt on our journey to the Rio Grande National Forest. We headed out on a short trip to some of the lesser known parts of Colorado. It was about a 4.5 hour drive to get there. For me, driving that distance is not a problem. I love being in the car and listening to music. I find it very relaxing, yet stimulating – daydreaming about where I am headed and the adventures to come. I love exploring and with COVID-19 affecting international travel, I have been doing as much as possible in my own back yard. I was actually supposed to go down to the White Sands NP but apparently New Mexico isn’t letting “Non-Residents” into any of their parks. I was very glad to learn that before heading out on that road trip. I couldn’t imagine making that long of a trek to find out that you are not able to enter, once you have already arrived… 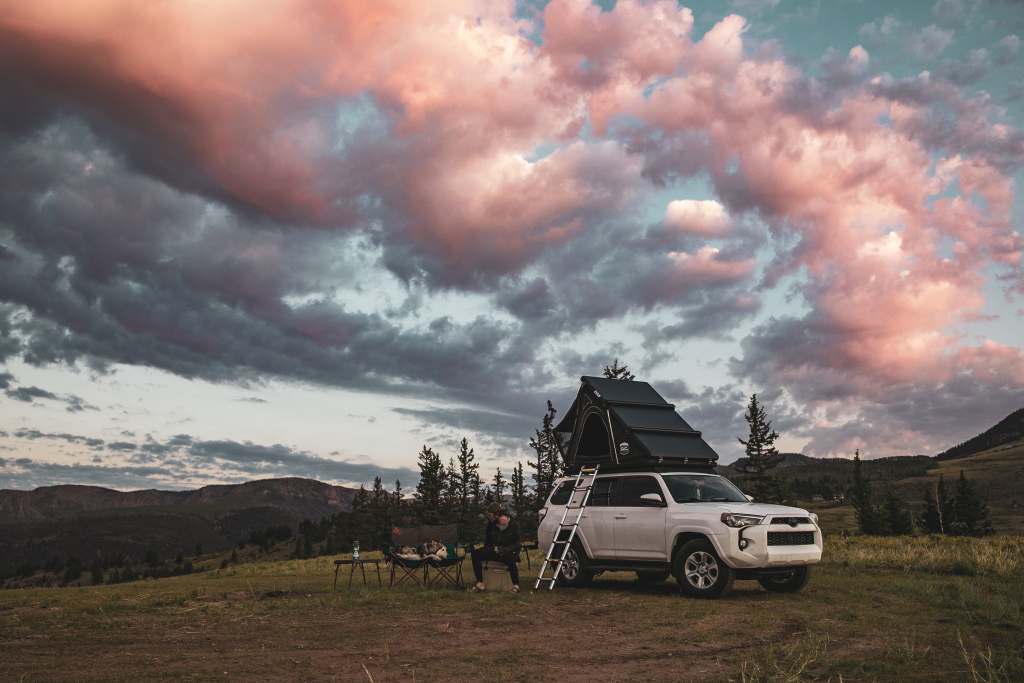 Fortunately for us, the destination we departed to was not closed and in fact was wide open for us to explore. Always love when you arrive to an area and finding camp is effortless. Had a relaxing evening and slept wonderfully after a couple of cold ones and a long drive. We woke up for sunrise and enjoyed the colorful sky that took over our panoramic view of the mountains nearby. It was beautiful and couldn’t have asked for a better start to our day. Packed up and hit the road. I entered in the destination and it was only like 24 miles or something so I didn’t think much about my gas or how long the trail was going to take. However, it did say like 3.5 hours. I was really confused and my maps have been giving me issues getting to remote places before, so I laughed about the ETA and continued on. That was until I realized it was a very slow, narrow and fairly difficult road and the GPS might actually be right about the 3+ hours it was going to take. I then started getting concerned about my gas… I had about 1/4 tank and estimated 90ish miles so I figured I had to be fine but I was off-roading so obviously you’re not getting as good of mileage as you would on a paved road. I also had to make it back out of this road so it was definitely a concern at some point but put my faith in the journey and pressed on. 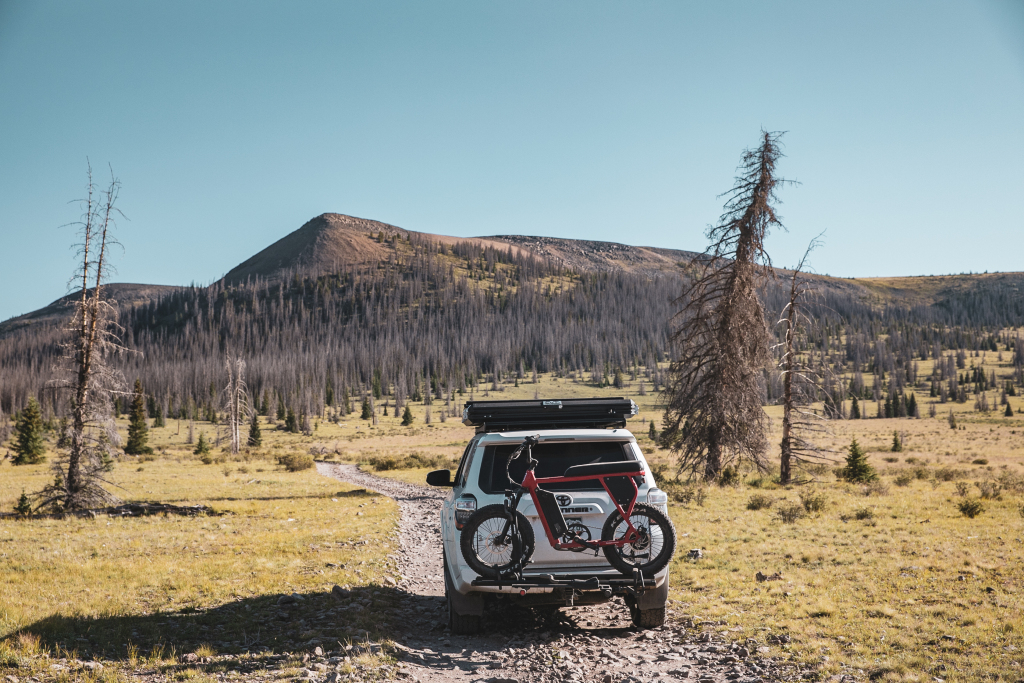 Sometimes when you are driving out into the middle of nowhere, you start to question if the destination is even back there. The landscape I was going to see, a volcanic desert with hoodoos and jagged peaks did not seem to fit into the environment I was driving through. I guess that’s the fun part of adventure. Heading off into the unknown in a remote part of Colorado. After a few slow hours of off roading, I finally reached the parking area. I packed up my camera bag, gave Kota dog some water and hit the trail. There was no one around except for what sounded like a couple backpackers set up in the distance. Parts of the canyon were visible from the trail and I was blown away with how spectacular and gothic this place looked even at a distance. It wasn’t a super long hike but you could spend tons of time exploring the area. I found a few amazing viewpoints both up top as well as down into the depths of the canyon. This area was mind blowing. Especially when you look at the history behind it. Wheeler was formed by a massive volcanic eruption, as well as millions of years of erosion and truly is one of Colorado’s most natural wonders. 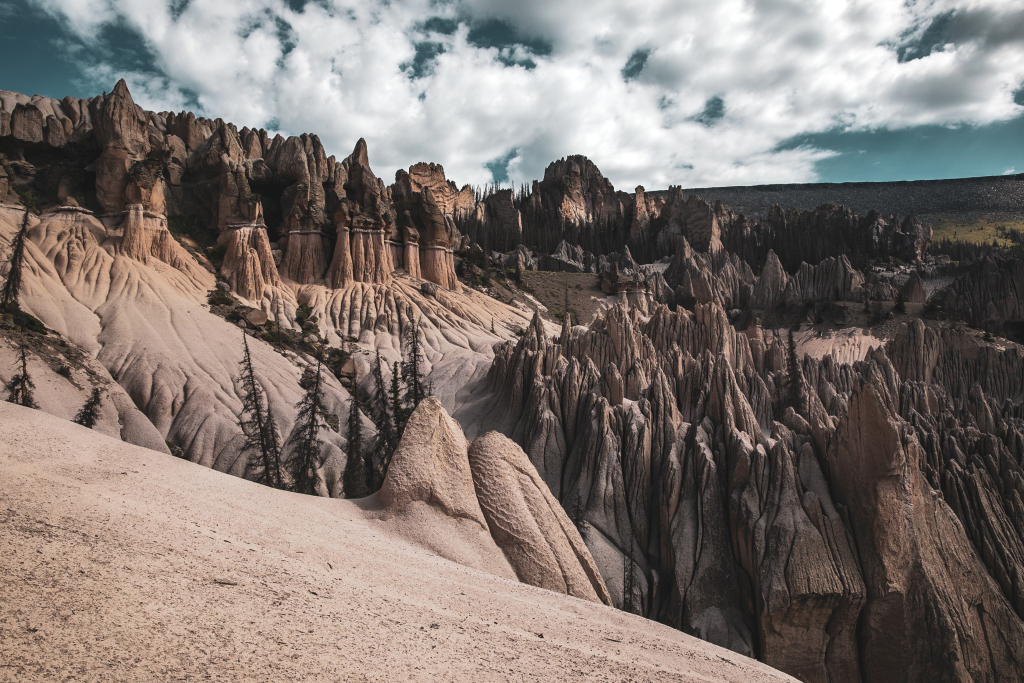 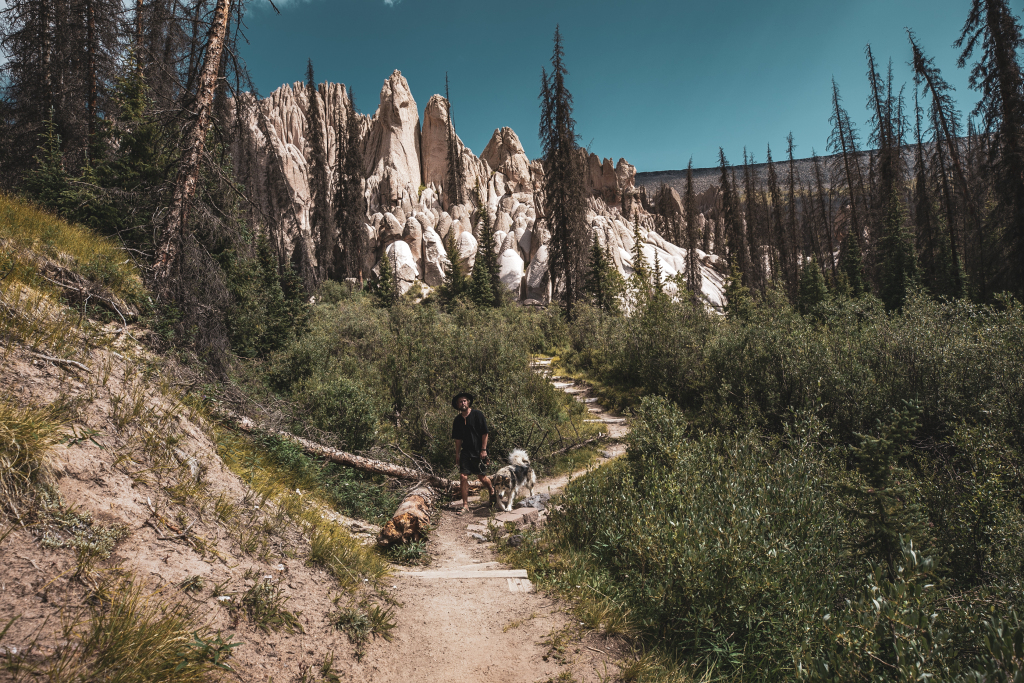 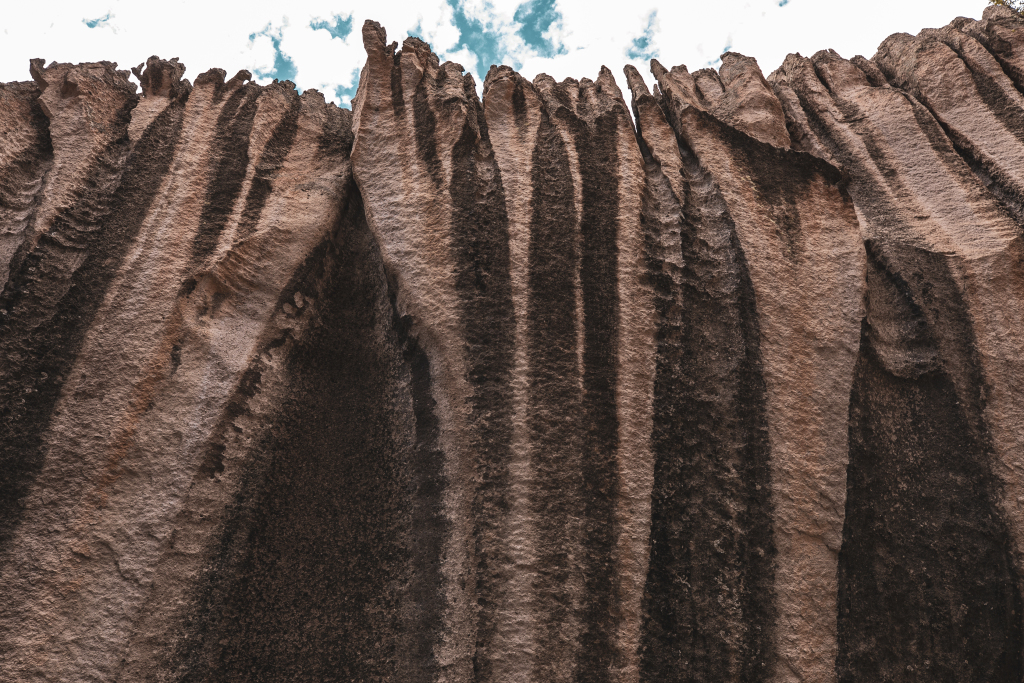 After wandering through the canyon a while, I decided to make my way back to the car. Had a sandwich, some fruit and a beer and hit the 3+ hour trail out of this completely wild dormant volcano. There was so much more I wanted to see in the area and also wanted to find a rad place for sunset! By the time I got off the trail, I was exhausted. But I made it out with about 30 miles left on my tank. So I was very excited not to have gotten stuck out in the middle of nowhere because that would have made for a terrible story. Or would it have? I got some gas and went back to where I camped the night prior. Took a nice nap in the sun and hydrated up. Around 6pm or so, I decided to pack up and make my way to this waterfall that has been on my list for a long time! The whole area had a very intense feel. I’m not sure why but the shapes of the peaks, the vast valleys and stormy clouds that arrived, just hit different. Also, the waterfall felt like it was right out of Iceland. 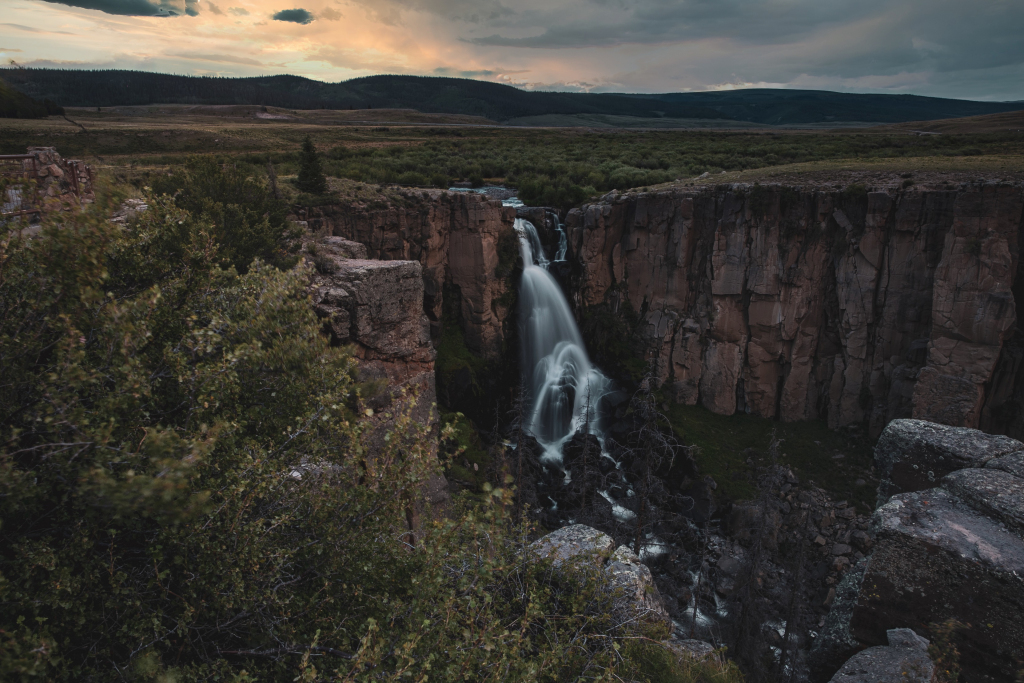 It was insane. The falls were glowing from the setting sun in the distance and directly over the canyon, the clouds started to turn very ominous and aggressive. It felt as if everything was constantly changing in the sky. Lightning struck a few times and it suddenly got very dark. You just heard this low growl take over the roaring sound of the waterfall and it started to rain, ever so slightly. It was refreshing and powerful. I stood out there overlooking the falls and let the rain hit my face. It was tough to leave this moment. Sometimes the Earth just speaks to you and you need to listen. I grabbed my tripod and hiked over the canyon wall into this prairie trying to get closer to the clouds. Once, I reached the top of this cliff, the whole valley opened up. I don’t know if it was something I ate or what but I swear, I saw this massive eagle form in the clouds and look like it was soaring over the valley. Maybe you can see it too? Maybe, I was just really into the vibe that this place was putting off. 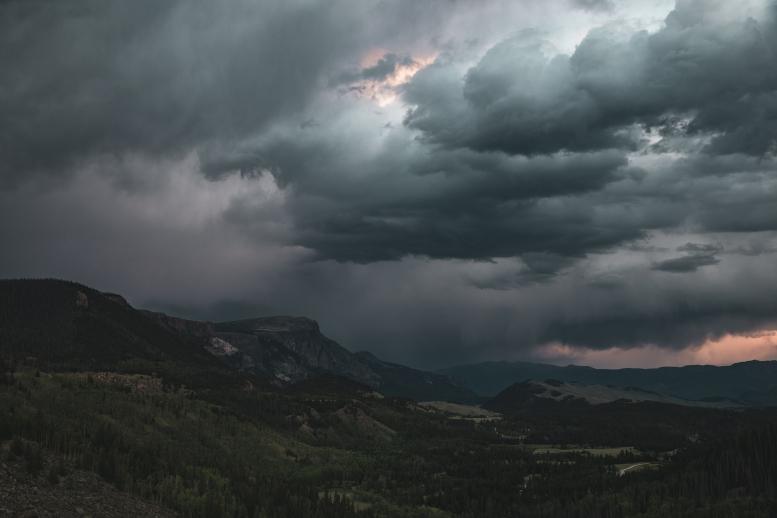 To add to everything that was going on, when I got back to my car, I noticed something stuck in my roof rack that I remembered hitting on my way into town. A bat. I remembered seeing him swoop right over my windshield and heard a thud but did not realize that he was still up there. Dead. But stuck. Out of all things that I could have hit… This just made the trip that much more ominous. 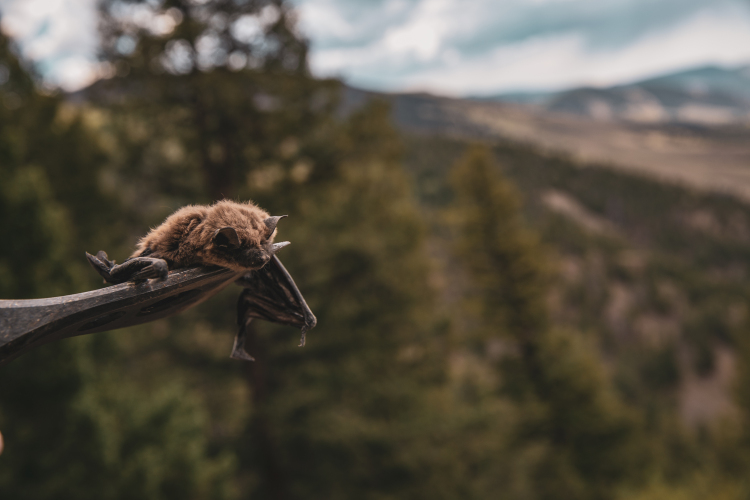 This whole area was formed by the same Volcano that blew up by Wheeler. Geologists say that “La Garita Caldera” was one of the largest eruptions in Earth’s history and that the debris blanketed most of Colorado with about 300 feet of ash. I guess this makes for a pretty scene, 30 million years and a few trees later. The wind ripped through the canyon and the sound of Thor’s hammer pounded in the distance. It was perfect. I didn’t have camp planned and figured there had to be something nearby. So, I drove into the valley and actually ended up at nice little spot right outside of the trees. Made camp and took in the magical evening that I just experienced. 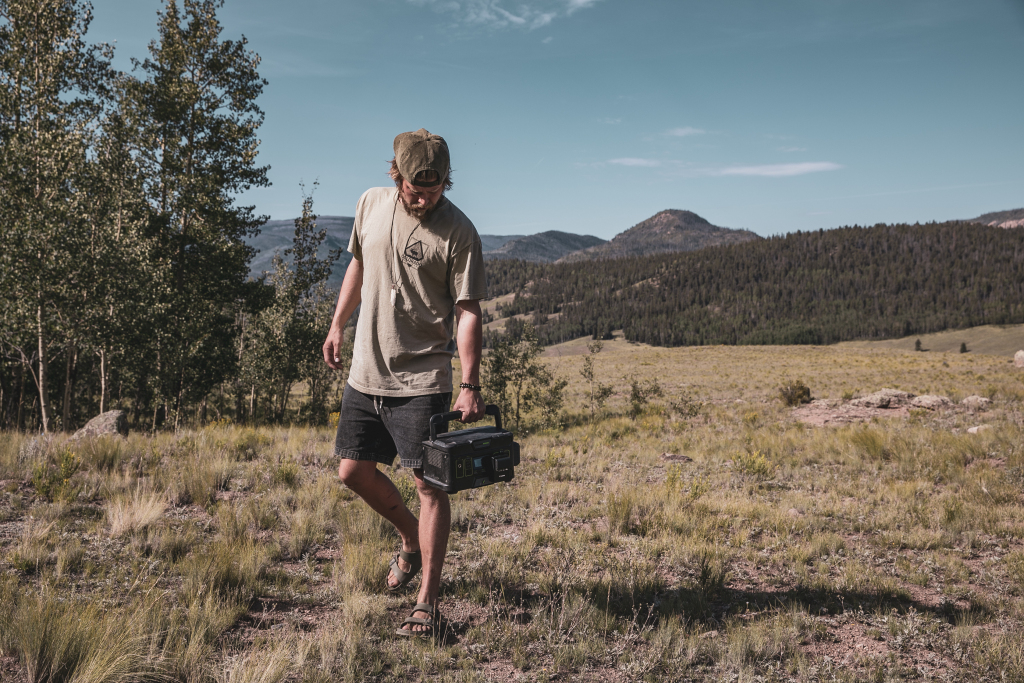 One thing that really keeps me going on trips is this portable power station (PAC500 Portable Power Station) by Blackfire. I’m able to keep my e-bike, computer, camera, lights and everything else charged up at all times. It also charges off a solar panel which is so clutch. I used to turn on my car and just use the couple bucks in gas it would cost me to charge my stuff. But I found myself doing that all too often and this has been the perfect substitute. Also, with everything being “work from home” now, this has been a nice way to get some work done with a WIFI booster or a local hot spot. Blackfire also makes some incredible rechargeable lights. A lot of camp lights are kinda cheap but these are actually super durable and have magnets that will mount to your car or rack. Check them out @blackfireusa or Blackfire.com. 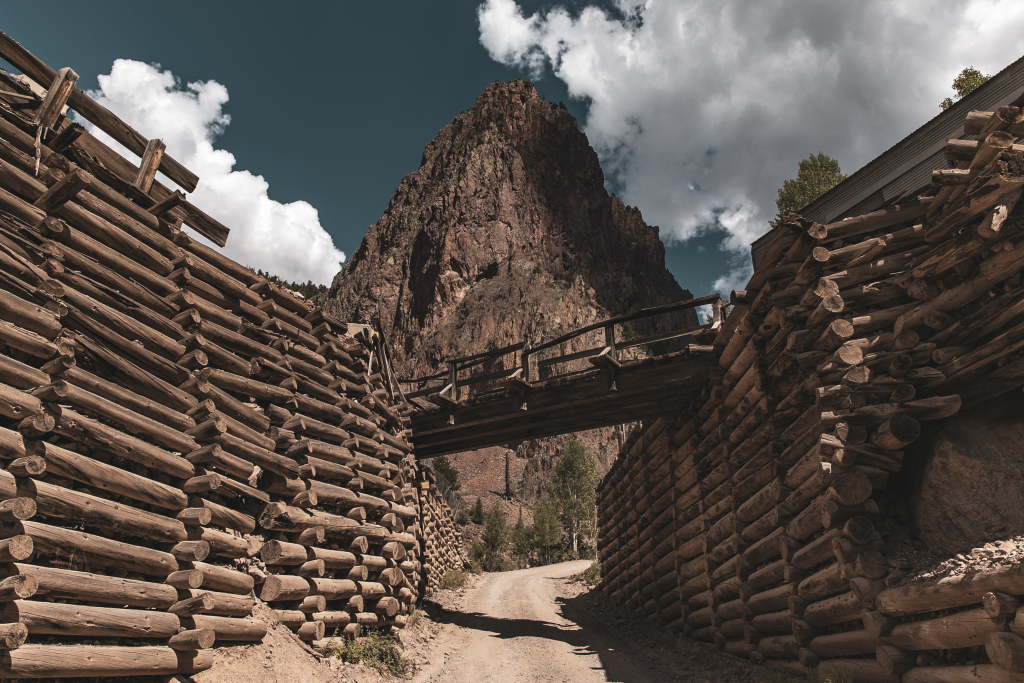 Woke up in the morning and hit the road to one last area before we made the trek back home. The Bachelor Loop. This was an old mining district and ghost town a couple locals told me about and it was such a sight to see. It was a fairly moderate trail that took you through a bunch of old mines and beautiful mountain views. Everything this area offered was so dark and I just loved it. I don’t think I have ever felt this way about an area. Especially one that is just a couple hours away from Denver. What an incredible trip. I will for sure be returning here soon. 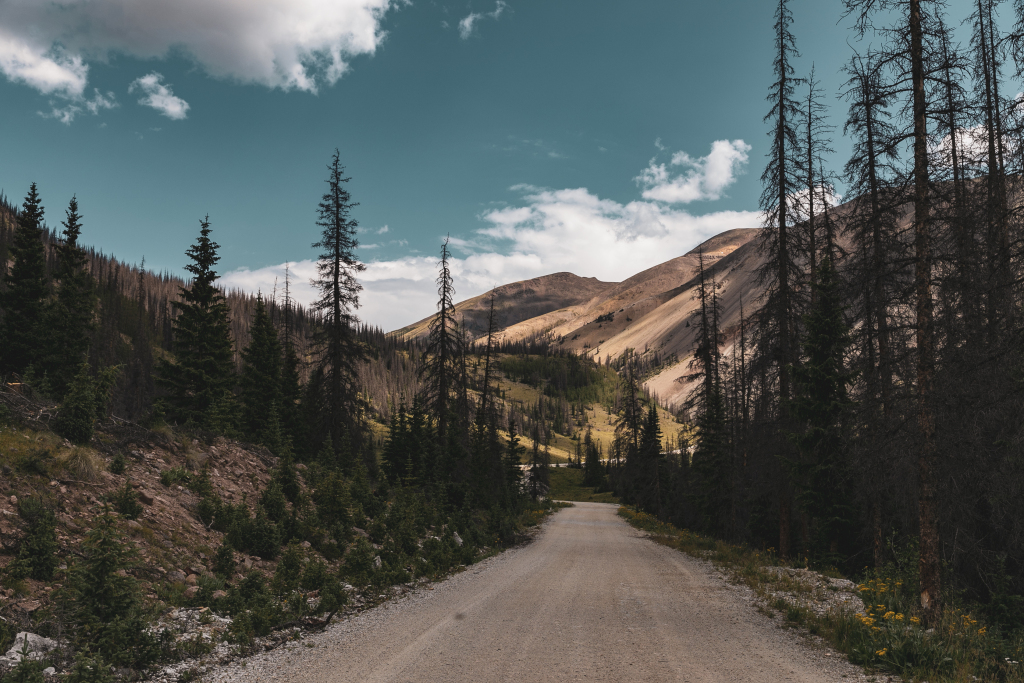 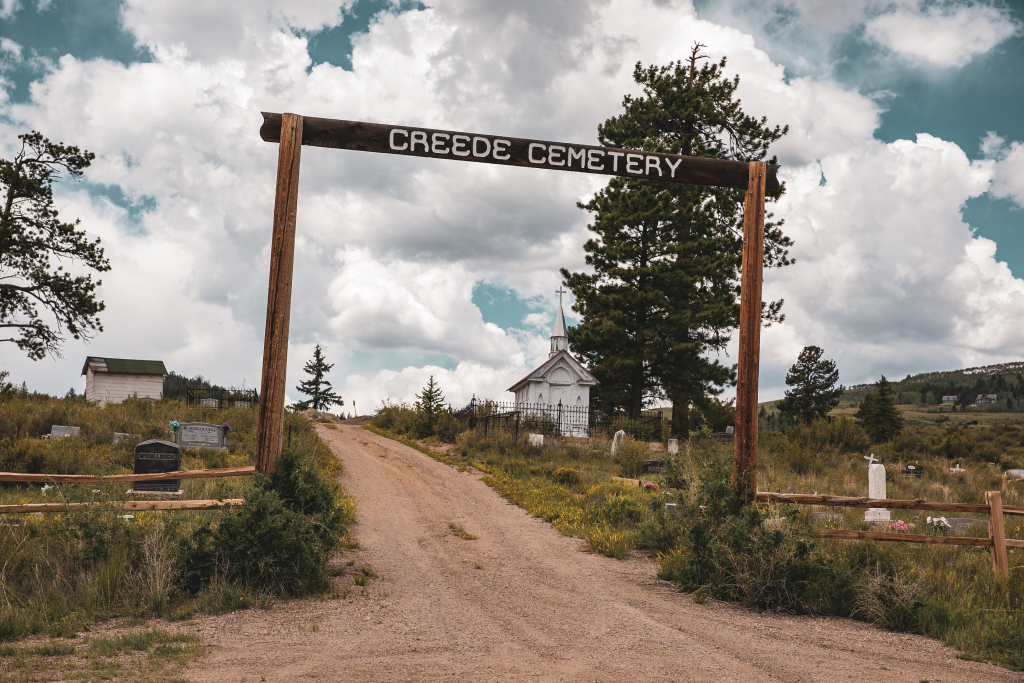 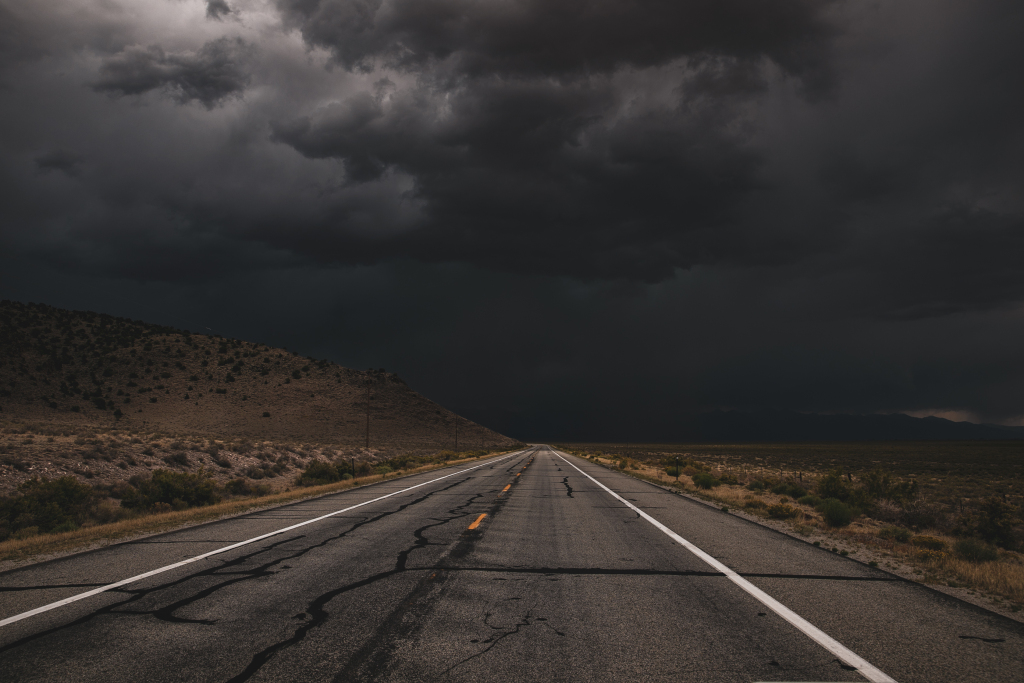 Thanks for following Jakes adventures. You can find this story and many more on his blog: https://jakeisexploring.com/blog/

Be the First to Hear About Exclusive Giveaways, Promotions, New Products, and More!

We use cookies to offer you a better browsing experience. If you continue to use this site, you consent to our use of cookies. Read More OK